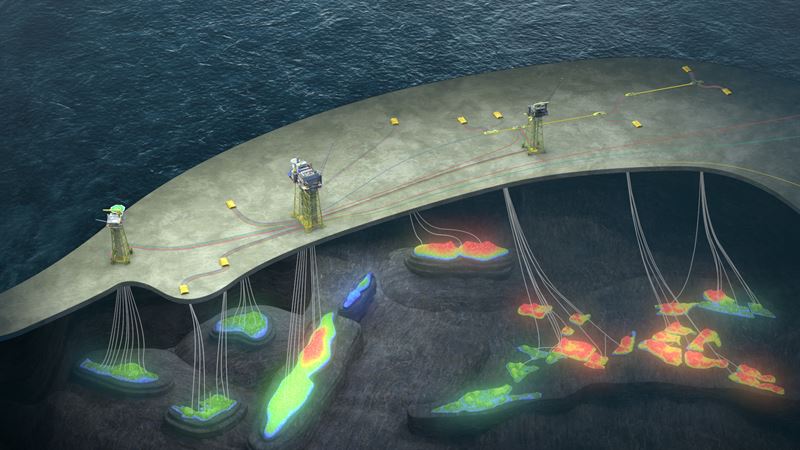 Aker BP has together with Equinor and LOTOS Exploration & Production Norge made a final investment decision to develop the NOAKA area, and the Plans for development and operation will today be submitted to the Minister of Petroleum and Energy.

NOAKA consists of the NOA, Fulla and Krafla licence groups, and the area is located between Alvheim and Oseberg. The area contains a total of around 650 million barrels of oil equivalent. Total investments are estimated at NOK 115 billion in real terms.

“NOAKA is the next major development on the Norwegian shelf. Through good cooperation across licence partners and operators we are now opening up a mature and prospective area in the North Sea. The area will provide enormous value creation for the society and contribute stable energy deliveries to Europe,” says SVP NOAKA Lars Høier in Aker BP.

NOAKA represents profitable barrels with a low environmental footprint, and the area will account for a significant share of Aker BP’s production starting from 2027.

“Through this development, we are setting a new standard in the way to operate a field. We are talking about remotely controlled operations, unmanned production platforms, new technology and data-driven decisions and work processes. We are also digitalising project execution with our strategic partners and suppliers,” Høier says.

The development concept consists of an unmanned production platform to the north developed by Equinor (Krafla UPP) and a processing platform with well area and living quarters developed by Aker BP (NOA PdQ) to the south. NOA PdQ is planned with low manning levels and is also being developed to be periodically unmanned after a few years of operation.

The Frøy field will be developed with a normally unmanned wellhead platform that will be tied back to NOA PdQ. NOAKA also represents an extensive subsea development with a total of nine templates. 55 wells are planned in the area.

NOAKA will be developed with a shared power supply from shore, operated by Aker BP. Connection to the central grid is planned in Samnanger in Vestland County. This will contribute to very low emissions of CO2 from the area.

The entire NOAKA area will be remotely operated from an integrated operations centre and control room onshore in Stavanger.

“One operator will be well-positioned for efficient project execution and safe and streamlined operations. This will yield greater synergies between the two developments and fewer interfaces. Equinor has developed a unique concept with an unmanned production platform in the northern part of the area. We would like to thank Equinor for the trust they’ve placed in us, and we are looking forward to move the Krafla concept into the execution phase on behalf of the partnership,” Høier says.

The NOAKA development will generate significant ripple effects. The employment effect is estimated to more than 50,000 full-time equivalents in the development and operations phases. The Norwegian share is expected to be over 55 percent. Yards at Stord, Egersund, Haugesund, Verdal and Sandnessjøen, along with a large number of suppliers throughout the country will contribute to the development.

“A very important part of Aker BP’s strategy is to increase value creation through long-term strategic partnerships with suppliers. We have a solid track-record of delivering projects through the alliance model. I am confident that we have the best strategic partners and suppliers with us to deliver the next major development on the Norwegian shelf,” says Høier.

In connection with the submission of PDOs, Aker BP has entered into NOAKA agreements amounting to approximately NOK 50 billion with alliance partners and suppliers, and some of the largest are listed below:

Aker BP has also secured rig capacity in the market, deliveries of critical equipment, as well as vessels for all major installation lifts. Equinor has on behalf of the power from shore joint venture entered into an agreement with NKT for the power cable.

All agreements and contracts are conditional on the Norwegian authorities approving the PDOs.

New names in the area

New names will now be used for licence groups and facilities in the area.

The area comprised by the overall development of Hugin, Fulla and Munin will be named Yggdrasil.